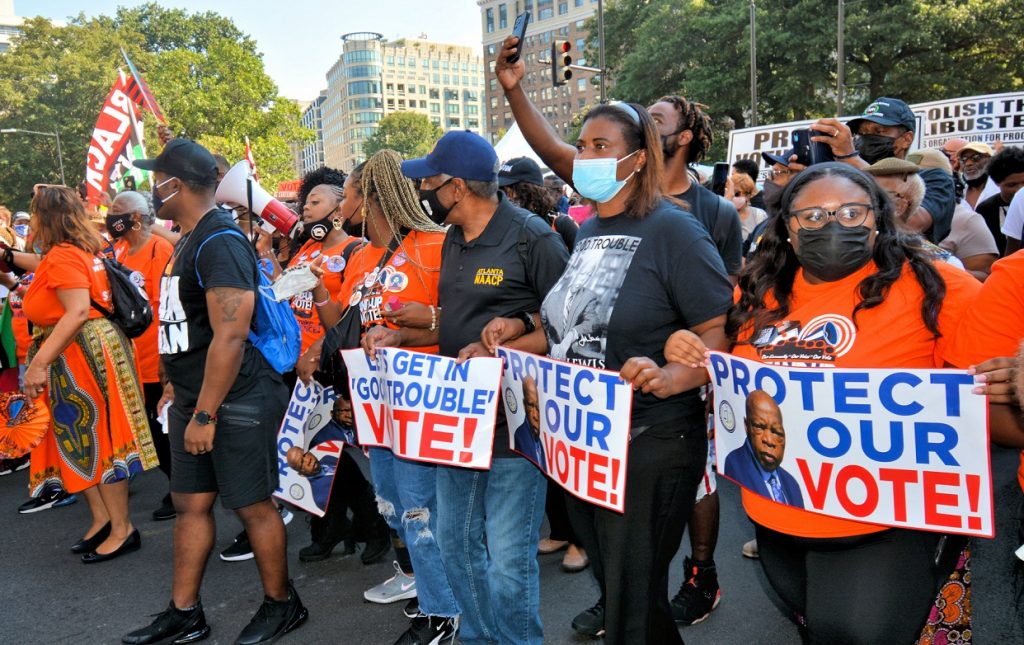 It may seem like a distant memory, but it was just 2006 when the U.S. Senate voted unanimously to strengthen and extend the Voting Rights Act and President George W. Bush signed the bill into law. At the signing ceremony, Bush declared, “My administration will vigorously enforce the provisions of this law, and we will defend it in court.”

Just seven years later, the Supreme Court began its ongoing campaign of eroding voting rights by undermining the Voting Rights Act, led by a Chief Justice with deep roots in voter suppression. By 2016, we witnessed the election of a President whose Administration and party embraced disenfranchisement as an electoral strategy.

Thankfully, renewed organizing to defend and advance voting rights has emerged to resist these attacks. But with so many voting rights bills discussed and altered throughout 2021, many people lack clarity on what the bills now active in Congress would do. That presents a big challenge for everyone seeking to engage people to speak out in favor of strengthening voting protections or to speak against the onslaught of voter suppression laws and anti-democratic redistricting schemes passing through state legislatures.

The challenge was amplified when the “For the People Act,” which democracy advocates spent many months and countless hours promoting, was modified and rebranded as the Freedom to Vote Act (FTVA). The FTVA and the John Lewis Voting Rights Act were both blocked by filibuster in the Senate when Democratic Senators Joe Manchin and Kyrsten Sinema joined Republicans to prevent the bills from being voted on. The House of Representatives subsequenetly combined the FTVA and John Lewis Act into one bill: the Freedom to Vote: John R. Lewis Act, but the Senate filibuster held.

A third key bill, Washington, D.C. Admission Act, passed the House, but was not acted upon in Senate as of late March, 2022.

Elements combined from the John Lewis Act would would ensure changes to local or state election law are reviewed by the U.S. Department of Justice before implementation. It would restore many rights that the U.S. Supreme Court effectively stripped away in its 2013 Shelby v Holder ruling, which gutted the Voting Rights Act of 1965. The John Lewis Act would restore the full protections of the VRA, including:

FiveThirtyEight provided this detailed breakdown of what remained and what changed as Congress combined previous bills into the Freedom to Vote: John R. Lewis Act.

The Washington, D.C. Admission Act (H.R. 51)
This bill would grant voting representation in Congress to the 700,000 people residing in the District of Columbia, who presently have none, and makes Washington D.C. the 51st state.

Other Bills
The three bills noted here do not address every important voting issue (reform of the Electoral Count Act also is needed), but incorporate many key provisions in other proposals, like the Accessible Voting Act of 2021 and bills cited above. Advocates for voting rights and fair elections overwhelmingly agree these bills include the most  urgent steps needed to prevent current attacks on our democracy from succeeding.

Overcoming
None of these bills will become law unless public pressure increases sharply or filibusters — a tool long used to deny equal rights to people of color and suppress their political power — are banished. The Demcratic majority could prohibit Senators from invoking the filibuster to block voting rights advances — just as Republicans exempted judicial nominations in order to pack the U.S. Supreme Court with right-wing Justices when Sen. Mitch McConnell was the majority leader. Alternatively, Democrats could abolish the custom of enabling filibusters entirely.

It’s important that your Senators know consitutuents have not forgotten about the urgent need for voter protection — please keep up your letters and calls!